I realize most of us are pretty jaded and just assume technology should be able to do everything and anything because, well, it's technology. But this whole FaceTime thing is really incredible if you think about it.

This is a screenshot from my iPhone making a video call (FaceTime in Apple speak) back to our iMac. 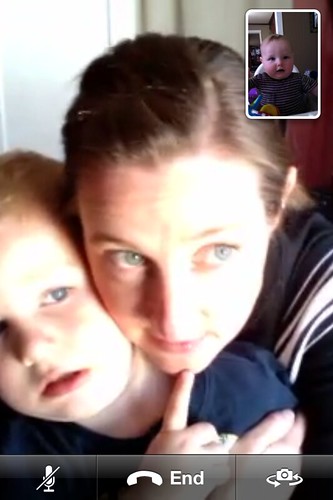 The iPhone is a device that is 9.93mm (0.37 inch) thin and you're able to make video calls on it. If that doesn't blow your mind think of where mobile/cell phone technology was 4 years ago before the iPhone came out. One of the most popular was a Motorola Razr. Give your head a shake and recognize how far we've come.

Right now FaceTime is limited to wifi (aka internet) connections between iPhones, iPod touches or Mac computers since to try and do it over the cellular data networks would require a level of contract negotiations that even Apple couldn't pull off right now. But it's only a matter of time.